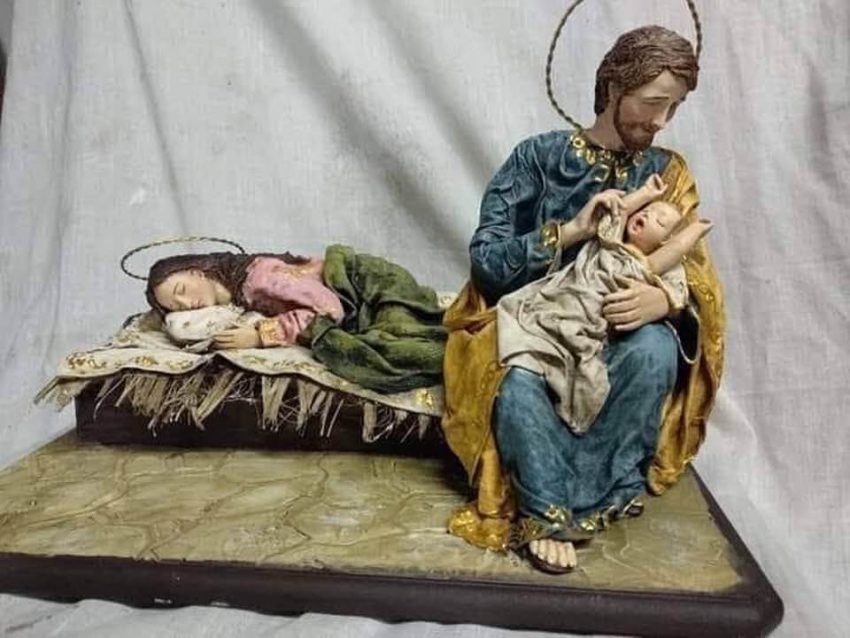 Joseph is the often-forgotten personality of Christmas. Obviously at Christmas we celebrate the birth of Jesus, the Christ or Messiah, who came to this world to save us from our sins and all of their consequences. Jesus Christ is Immanuel, God with us, and evidently, he is the central personality of Christmas. Any Christmas celebration that does not have Jesus as the main focus loses its meaning and becomes one more holiday with no purpose. However, Joseph has always taken a secondary place in Christmas performances. In the Bible we have the words of the angels, of Mary, of the shepherds, of the wise men, of the parents of John the Baptist, but in the Scriptures, Joseph does not say a single word. Joseph received four orders from God through an angel, and in all four he was obedient to the Lord. Joseph was a man whose lifestyle was according to the word of God and from whom we can learn a lot and also imitate his faith.

Joseph was a carpenter in Nazareth, a town in northern Israel, in the province of Galilee. Although originally the ancestry of Joseph was from the city of King David: Bethlehem; Joseph was in Nazareth because many years before many godly people from Judea went to Galilee for the purpose of converting the “heathen.” Therefore, it is quite possible that Joseph was from a very religious family. In fact, the only person in the New Testament called a “son of David” other than Joseph is the Lord Jesus Christ. Matthew 1:19 refers to Joseph as a righteous man, that is, someone who faithfully observed the law of Moses. Furthermore, Joseph was a humble person because when he and Mary present Jesus in the temple they offer a pair of turtle doves because they did not have enough to afford a lamb.

Matthew 1: 18-25 and Luke 2: 1-7 record the birth of Jesus Christ. Luke focuses primarily on the arrival of Joseph and Mary in Bethlehem and the birth of Jesus, but Matthew gives a little more context about Joseph, about his faith and obedience. The first command that José received was to marry Mary, his fiancée, despite the fact that she was already pregnant. Joseph and Mary had made a betrothal before a rabbi in an official ceremony. This commitment lasted a year and was so solemn that it took a divorce to break it up. Sexual contact was prohibited and if it occurred it was considered adultery. José realizes that Mary was pregnant and that he was not the father. Upon learning of this situation, Joseph wanted to leave her secretly because he loved Mary and did not want to bring shame to her. However, this action would not publicly vindicate their names since he would remain as the husband to whom someone was unfaithful and Mary would have to raise her son alone facing the rejection of the society. As he was thinking about what to do, an angel of the Lord appeared to him in a dream and ordered him:

“Joseph son of David, do not be afraid to take Mary home as your wife, because what is conceived in her is from the Holy Spirit” (Matthew 1:20).

Joseph was being called to suffer great losses. If he married Mary, people would assume that he was his father and his reputation as an upright man was going to be shattered. Furthermore, Joseph would lose the pleasure of initiating sexual intimacy with his wife. It was the first and only time that someone was conceived by the Holy Spirit and he had to believe God by faith. In addition, the angel gave him another order: “She will give birth to a son, and you are to give him the name Jesus,[f] because he will save his people from their sins” (Matthew 1:21). Joseph was called to deprive himself of the important privilege of begetting his first child and naming him after him. The name Jesus means God is salvation and represents the purpose of the birth of the Son of God, of Christmas. Jesus came into the world to save sinners; to get closer to God. To die for us; to die instead of us.

Nothing like this had ever happened in Scripture or history, but Joseph chose to be obedient. Without arguing or doubting for a moment: “When Joseph woke up, he did what the angel of the Lord had commanded him and took Mary home as his wife” (Matthew 1:24). Joseph was a simple carpenter, but he was a man obedient to God regardless of the cost or the circumstances.

A few months later, Matthew 13: 12-23 tells the tragic story of the slaughter of innocent children by Herod who had heard that the King of the Jews had been born and sought to eliminate him. Again, an angel visits Joseph to warn him about Herod and orders him to flee to Egypt: “When they had gone, an angel of the Lord appeared to Joseph in a dream. “Get up,” he said, “take the child and his mother and escape to Egypt. Stay there until I tell you, for Herod is going to search for the child to kill him. So he got up, took the child and his mother during the night and left for Egypt, where he stayed until the death of Herod. And so was fulfilled what the Lord had said through the prophet: “Out of Egypt I called my son” (Matthew 2:13-15). Joseph now has to leave his land, his friends and his work to go to a strange place and without knowing how long they should stay in Egypt. However, Joseph decided to be obedient to the Lord immediately and without questioning the divine will.

The fourth order that Joseph received and obeyed was when the angel visited him again to tell him to return to Israel: “After Herod died, an angel of the Lord appeared in a dream to Joseph in Egypt and said, “Get up, take the child and his mother and go to the land of Israel, for those who were trying to take the child’s life are dead.” So he got up, took the child and his mother and went to the land of Israel” (Matthew 2:19-21). Joseph and his family probably had been in Egypt for about two years. Joseph is called to leave again his job, his new life and the comfort and protection of their new residence. However, once again, Joseph immediately obeyed without taking into account the implications that his family would have to face for leaving everything again. Furthermore, God revealed to him in dreams that he would need to return to live in Nazareth without giving him any explanation. Returning to Nazareth meant facing pressure and social rejection again, but Joseph decided to be obedient to the Lord as he had always done.

Joseph was a man obedient to God. Despite being the forgotten personality of Christmas and that we do not know much about him, we can learn a lot from his godly example. We can only know and please God through obedience. As we celebrate Christmas, I hope we can prepare our hearts for Jesus, in obedience to Him. Are you an obedient person to God? José was obedient and invites us to imitate his faith this Christmas and for the rest of our lives.